Diet Chef had not only helped me lose weight but had also educated me in healthier choices and smaller portions. 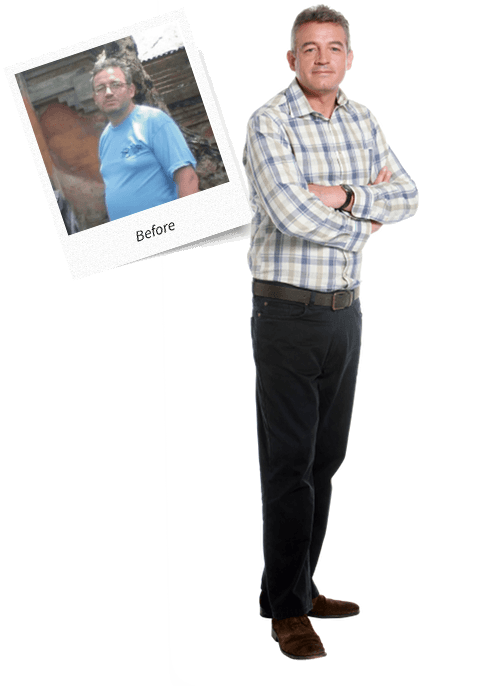 I am 48 years old and 6ft 2ins tall. I work as a busy lawyer and airport manager. Part of my duties involve responding as a member of the airport’s Rescue and Fire Fighting Service crew. Just before Christmas last year we received a report of an aircraft needing to make an emergency landing and I responded to the crash alarm. On arriving at the fire station having run from my office – not that far really – I felt so out of breath – huffing and puffing – and was sweating profusely. I decided enough was enough and I needed to lose weight! I have been a single parent for 14 years and now that my son is at university it seemed an ideal opportunity to have a really serious go at dieting – not having to make two lots of meals etc. I don’t have time to do any serious exercise – just a long walk every other weekend or so if possible. I had looked at loads of diets and concluded that there was really only one way to lose weight – eat less calories than the body uses. No need for fancy plans, clubs or paying out subscriptions. Diet Chef fitted my requirements perfectly. A fully balanced meal programme every day and so very quick and easy to prepare – perfect for busy people. I started in earnest on 12th January 2010 and my weight was 16st 2lbs. I had a 38ins waist. The only other thing I did was to buy a set of Salter Mibody scales from Argos so I could record not only my weight loss but also other important things such as BMR, Body Fat, water content etc. I am so pleased to say that on 10th April I was down to 13st 6bs !!!! I had to suspend the diet for four weeks to go on holiday and then away on business – a dangerous time with all the attractions of hotel cuisine. However I found that at breakfast I was instinctively going for the muesli and fruit rather than the very tempting “full English”. Similarly at dinner I was choosing the healthier option almost without thinking and avoiding the mixed grills, steaks and chips. Diet Chef had not only helped me lose weight but had also educated me – almost subliminally – in healthier choices and smaller portions. I weighed myself again on 14th May and not only had I kept the weight off but had lost another pound. I’m now 13st 5lbs. My target weight is 12st 10lbs by 9th June so for me it’s now the final push and I’m sure I can keep it up for just 4 more weeks. My waist size is now 34ins and already my jeans are loose again – I’m aiming to be a 32ins waist at the end. Dieting was hard at first. It did take about a week to get used to feeling hungry most of the time but this does pass. I also really missed the wine and the beer – I was a big drinker – so I did a couple of things to motivate me. took one of my son’s weightlifting weights and slowly built up a pile matching my weight loss pound for pound. If ever I got tempted I just picked up the pile – walked round the house a couple of times – and temptation soon passed with the thought of that being how much weight I used to have to carry round all the time. It was heavy! Diet Chef worked for me …… and when you read on the website that the meals are tasty – they really are. Have loads of veg with it and you won’t be hungry afterwards. Good luck to all who are trying and stick with it. It’s well worth the effort. Diet Chef certainly makes it easy – just add willpower and the rest will take care of itself.
Previous story Next story
Join over 250,000 people who chose Diet Chef
Get started now